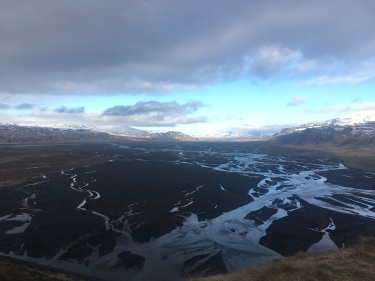 Iceland is known for many things, their hot springs and lagoons, their beautiful and dramatic landscape, a location where the Northern lights can be seen, and amazingly a unique breed of horse. However, it is most prominently known for its volcanoes. Many remember the eruption of the volcano Eyjafjallajöjull in March and April 2010. Challenging to spell, and even more challenging to pronounce. The eruption had a huge impact, not only on the Iceland, but on Europe as well, grounding 17,000 flights a day.

Iceland is home to roughly 130 active and inactive volcanoes, and currently has 30 active volcanic systems running through the island. This is due to Iceland’s location on the Mid-Atlantic Ridge, the boundary between the North American and Eurasian plates. This is a divergent tectonic plate boundary located on the floor of the Atlantic Ocean, meaning that the two plates are pulling away from one another. The Mid-Atlantic Ridge can best be seen at Thingvellir National Park.

The staggering statistic of volcanic activity may seem daunting to some, leading one to question why anyone would want to live on such an island. However, the Icelandic people have truly capitalised on their volcanic activity.

The hot springs located in Iceland have been used as swimming pools by both locals and tourists. The average temperature of the geothermal pools is around 37-39˚C, and the waters are rich in minerals such as silica and sulphur.

The volcanic nature of Iceland is useful for more than just creating swimming pools. Iceland relies on fossil fuels for just 0.1% of their energy supply, 26.2% is supplied through the use of geothermal power plants and 73.8% is generated by hydroelectric power. With their location, it is possible for the country to rely 100% on green energy sources, by further capitalisation on geothermal springs.

Iceland is an incredible place. Its physical landscape is stunning, the processes that have shaped and continue to shape Iceland are fascinating, and their use of such processes, genius. It is a country we recommend visiting.

Turkey is a fascinating country because it spans so many cultures, languages, religions and political views. Geographically, it spans close to 1,100 miles across and it borders eight countries, Armenia,

Azerbaijan, Bulgaria,
Georgia, Greece, Iran,
Iraq, Syria. I suppose Turkey could be viewed like a condensed Russia…Right, that probably needs some explaining. Turkey and Russia, when you compare them on a map look vaguely similar because they are both oblong countries, bordering many other nations and serving as a bridge between the East and West. For example, Western Russia abuts the EU and Eastern Russia shares borders with China. (Amazingly, during the deep winter, Russia also shares a border with Alaska because the sea freezes right across to the Aleutian islands!) Similarly, Turkey provides a bridge between the EU and countries such as Iran. So Turkey, due to the nature of its geography, is forced to contend with huge socio-religious, and socio-political differences, for example Western Turkey is generally more understanding of Western Christianity, but Eastern Turkey is more Islamic.

On a separate note, its worth considering the Turkish proposal to join the European Union. Turkey will have to show that it can balance between their economic, cultural and business interests in the Middle East and the Western values of the old established democracies of the EU. Once Turkey has managed to fully comply with the Universal declaration of human rights as proposed by the UN, it will be a model for diplomacy and its unique position may even help broker peace deals between the East and the West.

Who knows, in the future, Turkey might
even be a valuable asset to the EU?

Ok, first things first, definitions. A proxy war is defined as a war instigated by a major power, but it is not directly involved.

The proxy war between Iran and Saudi Arabia is fuelled by one major schism inside Islam, often called the Sunni-Shia sectarian divide. The vast majority of Saudi Arabia’s population belongs to the Sunni sect, whereas the majority of Iran’s population belongs to the Shia sect. Sunni’s constitute 90% of the global Muslim population and Shia create the minority 10%. These sects have the same fundamental beliefs but they have slightly different theology, law, ritual and practices. This means that in countries where religion is enshrined within the state (such as in Iran and Saudi Arabia), elements of the Sunni or Shia practices can reflect in the governing laws, founding principles and foreign policy.

As a consequence, conflicts within the Middle East almost always relate back to the Sunni-Shia sectarian divide. In this instance the proxy war is fuelled by religious differences and each country’s desire for over-riding authority in issues concerning the Middle East.

The proxy war officially started when America invaded Iraq in 2003, which created a power vacuum, that changed the region’s overall power balance. Both Iran and Saudi Arabia tried to influence the remaining Sunni majority government, with Iran supporting the remaining Shia militia to create a Shia government, but Saudi Arabia supported Sunni militia. This only caused sectarian violence, exacerbated by political instability. Later, similar exploitation occurred in Lebanon. This shows that Saudi Arabia and Iran wanted to oppose each other more than help rebuild Lebanon and Iraq. Following on from 2010, similar sectarian manoeuvring occurred during the Arab spring which created power vacuums in Algeria, Libya, and Egypt.

At the moment, events akin to 2003, 2010, 2011, are transpiring in Yemen. A rebel group, backed by Iran overthrew the Saudi supported President in March 2015. Now, there is another power vacuum in Yemen. Both Iran and Saudi Arabia are attempting to fill the vacuum by supporting militia with weapons and supplies.

Meanwhile, since the start of the Yemeni conflict, 50000 people have been killed or injured, famine has become widespread and the UK is fuelling this conflict by selling £5.6 billion worth of arms to Saudi Arabia.

If you’re interested I recommend reading this article from Al Jazeera: 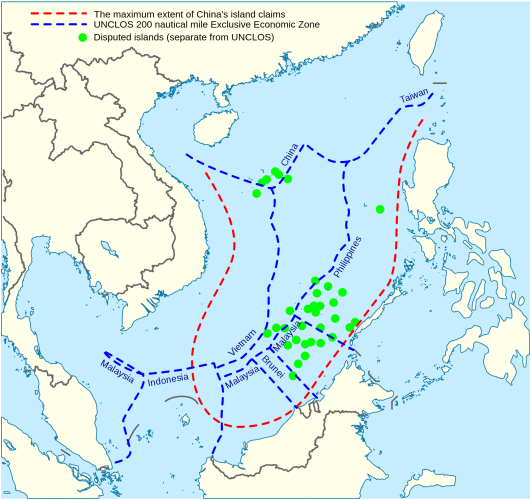 The South China sea is a relatively small sea, compared to the Atlantic for example, but it is causing many geo-political, military and geo-economic issues.

The dispute is centred on the Spratly islands, a small set of reefs in the middle of the sea. It is causing a problem within international diplomacy and politics because the main players China, Philippines, Vietnam and Malaysia are all claiming part, or all of the reef as their own.

The main issue here is that the South China sea is rich in resources such as minerals and oil. Analysts are describing the South China Sea as another “Persian oil gulf” which highlights the valuable and consequently fractious nature of this region. It is also a very important  shipping route, for example $5.3 trillion USD worth of trade passes through this sea. Almost certainly, any item you buy which originates from China, will have passed through this sea. In the event that tensions escalate to military proportions, it will directly affect our shops and your shopping. So the combined reasons of trade and resources mean that all the bordering countries want to control this area.

China has claimed “indisputable sovereignty” over the Spratly islands (more like reefs) and the majority of the South China Sea – shown by the red lines on the map – and China wants to “remain firm to defend its rights in the region.” So, without international regulation or awareness this region has the potential to be very troublesome…

I hope you can see the problem beginning to emerge!

Try out this link from BBC news if you’re still interested!